Monday 27 October, 2014
Welcome back! We are pleased to report that the 2014 Peregrine falcon breeding season at Alcoa Anglesea is well underway.

Ava has once again elected to return to the coal bunker ledge, her preferred nesting location since 2010. We have been keeping an eye on the bunker ledge however Ava had managed to position herself out of view. That is until now ....

Monday 10 November, 2014
Our two chicks are growing up fast and beginning to move around the bunker ledge. More often than not, they are no longer visible from the peep hole on the 6th floor above. However, today these cuties were clearly visible as they peeked over the bunker edge from the 4th floor below

Monday 24 November, 2014
At this age the solid white coat of down the chicks have been sporting since hatching has clearly been replaced with juvenile plumage. They are growing up so fast!

One of our chicks has taken flight whilst the second sits tentatively on the edge of the bunker. Fledging, leaving the nest, is a part of the life cycle of the juvenile Peregrine falcon and usually occurs around day 40 which is spot on for when our bundles of white fluff were sighted. 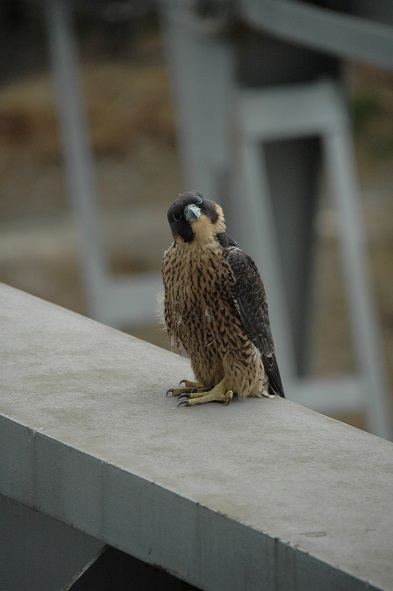 Torna a “Birdcams around the world 2014”