Early Friday – February 10, 2017 – The American Eagle Foundation (AEF) plans to retrieve the eaglet “Peace” the from its wild nest in Northeast Florida.

On February 6, 2017, AEF NEFL Remote Camera Operators alerted AEF officials Al Cecere and Gretchen Butler about the balance problems the 7 week old eaglet was exhibiting. After closely monitoring the eaglet via live streaming nest cams for hours, we noticed black monofilament (commonly used for fishing) wrapped around the left foot, including the hallux. Shortly after the discovery of the fishing line, the female parent “Juliet” appeared to be pulling and tugging on a clump of moss while going after a piece of food, and it is believed that the parent had removed the line from the eaglet’s foot.

Once the fishing line was identified, AEF immediately began talking to USFWS and making plans to rescue “Peace.” We were beyond excited that this problem seemed to have been resolved without the need for human intervention which is rather rare when fishing line enters a nest. So, thereafter, our plans were to continue to monitor the eaglet, but then a storm rolled through the area knocking power out for almost 24 hours. The electricity was restored on February 8, at which time it was immediately noticed that “Peace” was still having significant balance problems.

A decision was made on the evening of February 8 to continue plans for the rescue, which will hopefully take place early in the morning on February 10, 2017 – at which time our cams will be taken offline.

“Peace” will be taken to the Audubon Raptor Center for a complete medical checkup and assessment.

Feb 11 2017, 2:25 PM
AEF: About Peace: This is the latest update from Audubon. Peace weighed in at 5.74 pounds, a good weight for a small male of 7 weeks. That is not positive confirmation that Peace is a male, because the lab info has not come back. However, physical observation by experts leans in that direction. Both talons are working normally. Radiograph revealed no abnormalities or broken bones. Muscles appear normal and feel normal. No lead poisoning! (we did get results on that). Waiting for other lab reports.

“Peace” is a most special patient at Audubon with his own special mew (enclosure) inside their clinic. He has received PT (physical therapy) to help with his walking. He still is hesitant with his foot, but can stand and put weight on it, and was perching this morning. He is eating and gaining small amounts of weight each day. Audubon continues to test blood every 48 hours to rule out anything neurological, but there is no diagnosis yet. We hope to officially know “Peace’s” sex by Monday!

AEF-NEFL UPDATE ON PEACE: "It's a boy!" Yes, the Audubon clinic confirmed Peace is male through blood results just received. They pushed him a little harder on his physical therapy today, and they are still working on his balance issue, but he's doing well!

AEF-NEFL UPDATE ON PEACE: As viewed today Peace was shy once out of his mew and walked (or ran) within the clinic at Audubon this morning for his PT exercise. Actually his stance is quite typical of youngsters as they think they are hiding. He actually pranced around the clinic. He is progressing well and weighed in at 6.5#. He was later feasting (behind closed doors in his mew) on his breakfast. Updates will be posted as received from Audubon.

Hope officially branched on Feb 20 and looks ready and eager to be an eagle.
AEF-NEFL Nest 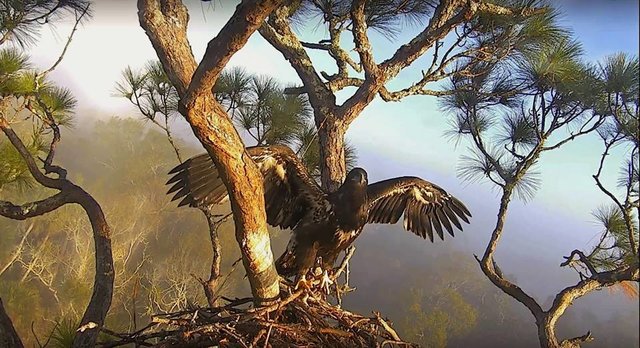