FALCHI PESCATORI A LOCK OF THE LOWES -SCOZIA


Our two young ospreys in Africa continue to do well and the good news is that our 2013 chick Blue YZ seems to have found herself a winter territory in Guinea Bissau for now. Her latest satellite tracking data show her sticking around a delta area between the Cantanhez Forest National Park and the Cufada Lagoons National Park. We hope this area which is criss-crossed with numerous rivers and waterways, and lightly populated with small farms, will be a safe place for her to stay. 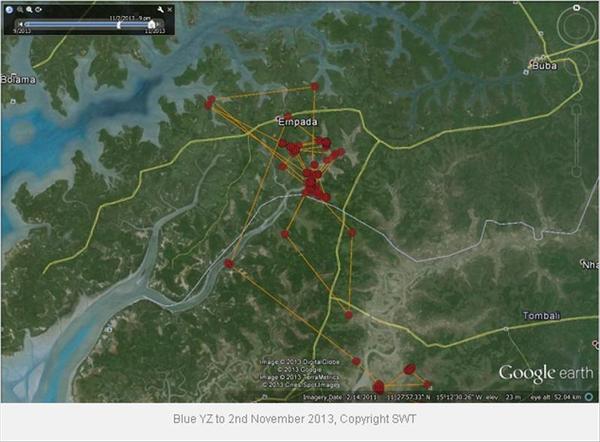 I hopefully will have time tomorrow to post all the details for you on our interactive map. 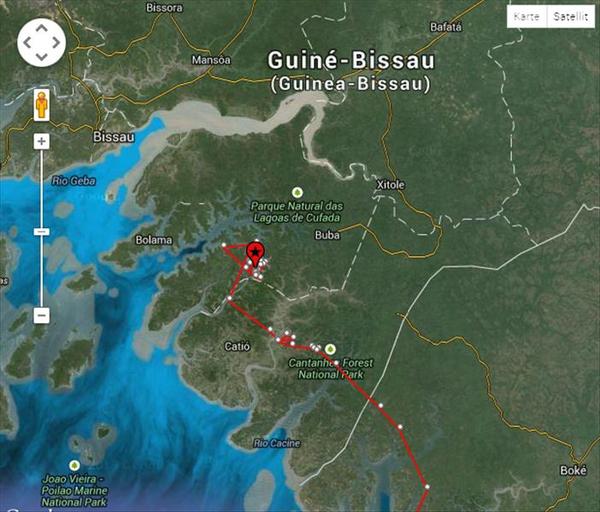 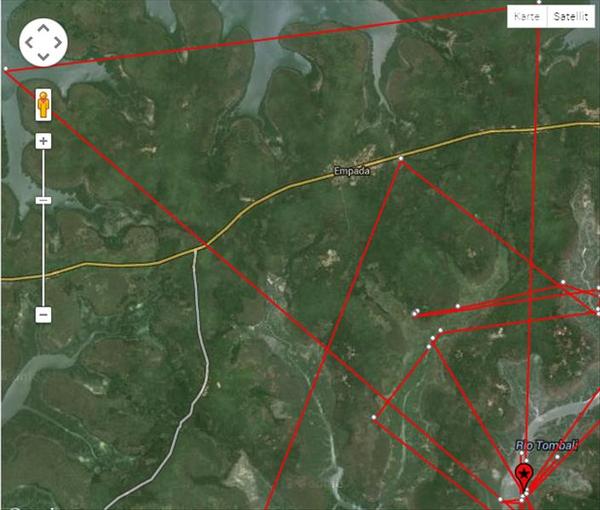 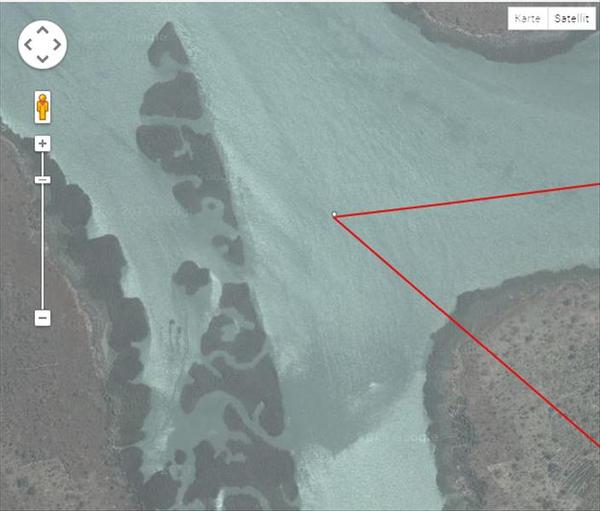 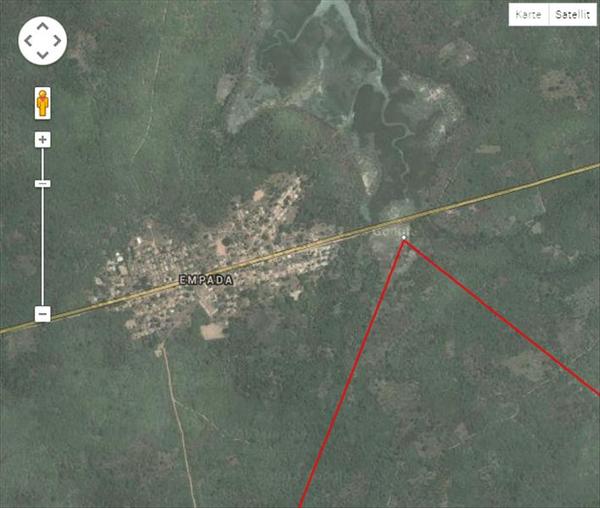 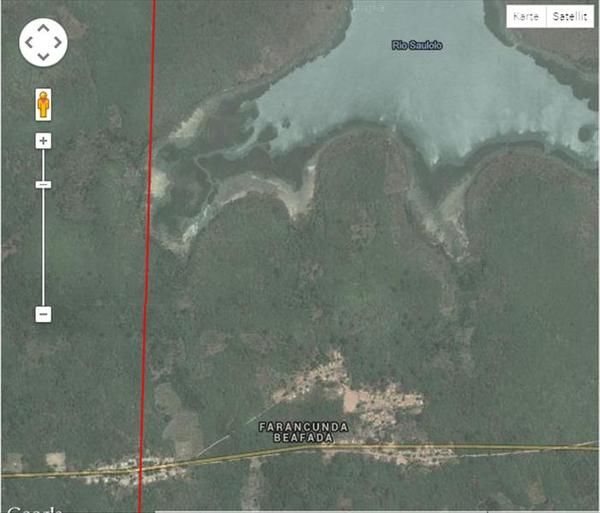 Both our young ospreys are doing well and are still in their respective wintering areas in Africa. Blue YZ has moved a whole 5 miles in the last few days, to an area slightly downriver of her previous location. It is interesting in this close-up map to see her exploring relatively minor river channels and roosting at night on the boundary between the jungle and field edges. 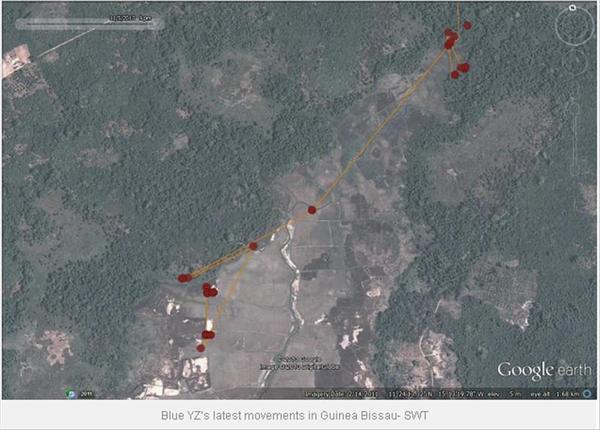 Meanwhile Blue YD continues to hold his favourite territory on the Senegal/ Mauritania border. His home range in this area is about 7miles square and varies very little from week to week- simply one bend in the river east or west as the fancy takes him.

One wonders if he is now so well established that he is chasing away this years new arrivals – younger ospreys. 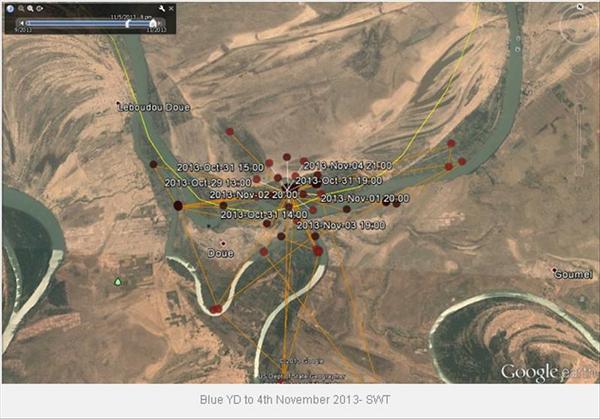 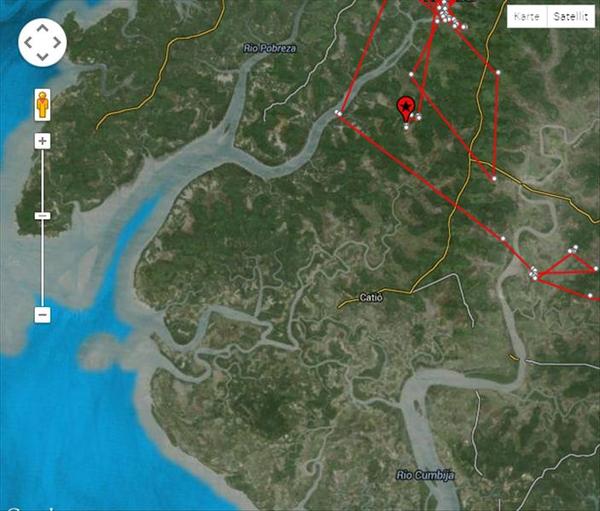 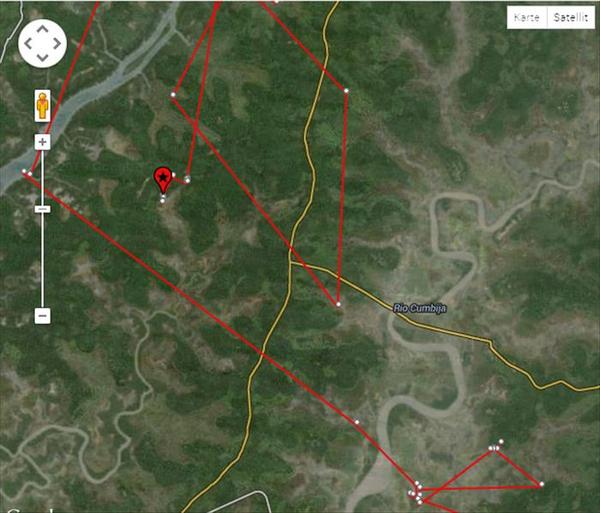 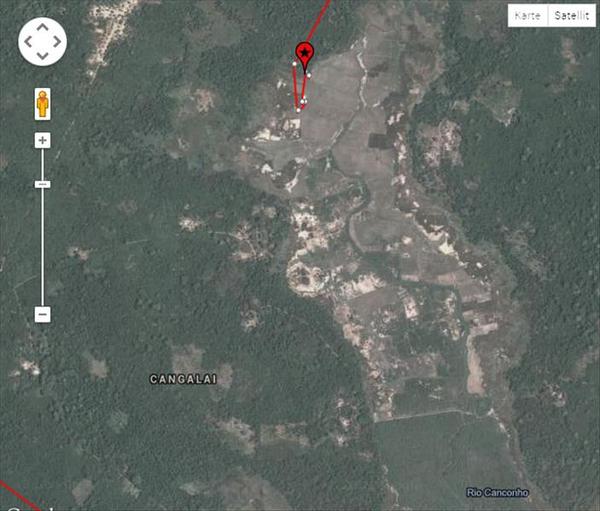 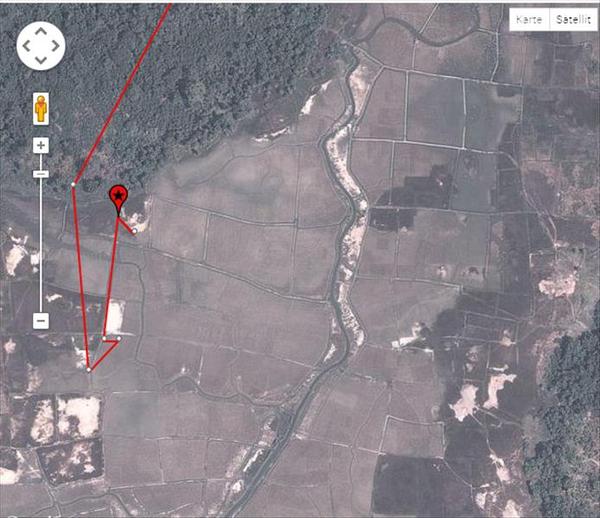 Grave Concerns for Blue YZ
Posted on November 19, 2013 by jonathan

Unfortunately it looks like there may be a problem with our young satellite tracked osprey, Blue YZ, whose fascinating first migration we have been following so avidly this autumn.

Despite several attempts over the last week to access data from her tracking device, the satellite is not showing any new data at all. The last confirmed GPS data we had was on the 5th of November, when she was in Guinea Bissau in an agricultural field in a delta area. 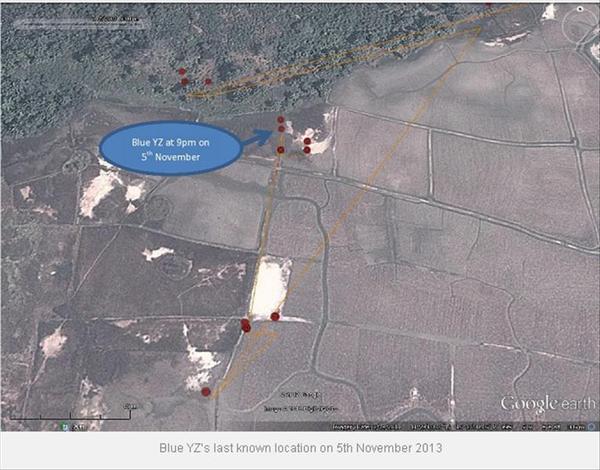 Since then the tag has not transmitted any new information to the satellite, which means there are two possibilities. The first is that the tag has simply malfunctioned and stopped working, which is quite possible (you may remember we suspected that this may have happened with last year’s bird, Bird 44). The second possible explanation is that the bird has died and the tag has stopped transmitting as it has fallen to the ground or has been destroyed. It is possible Blue YZ has been predated, succumbed to exhaustion or even to human interference.

The only way to be certain which of these scenarios is the explanation of our birds fate, would be to visit the site to see if we can find evidence of a body, or find out from locals what they have seen. Unfortunately this area is politically very unstable at the moment and with the official foreign office advice being not to travel there, this is not practical . We have been struggling to find any local contacts in the area who might be able to visit the area on our behalf, but so far with no luck.

This highlights huge challenges faced by young migrating ospreys – and the importance of continuing to study these birds in this way, to ensure a greater understanding of their behaviour for conservation in the long-term. We will of course continue to try to access the satellite tag in case it does restart but this is unlikely, and will keep you updated with any further developments. 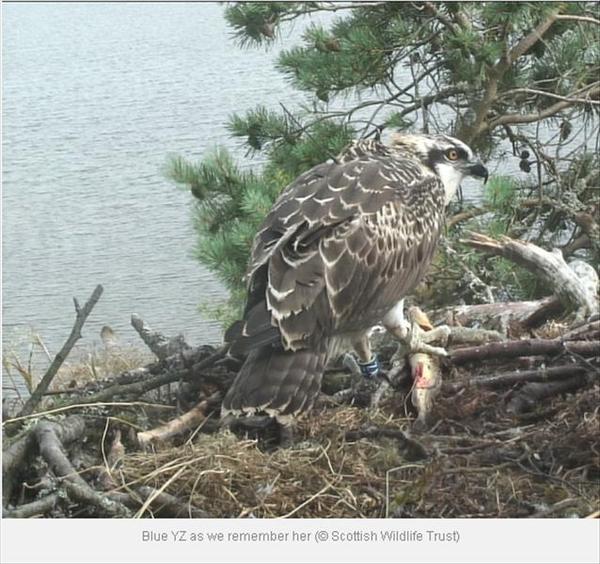 We may never know with 100% certainty what happened to this young osprey but we do know that she has taught us so much this year – not least through the fascinating story of her mammoth migration. On that positive note, Blue YD is alive and well and we will bring you news of his recent movements tomorrow.

this is a very very sad, bad news

I have found a nice posting in Looduskalender-Forum about lost tagged ospreys in the Tombali region of Guinea Bissao. Forum member Macdoum updated the link to Dyfi-Blog 2012 where the same problem was discussed. 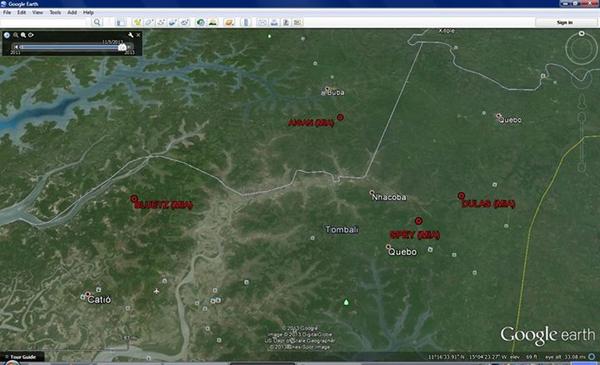 This is the blog I hoped I would not have to write, not for many more years anyway. We have lost contact with Dulas.

The last blog written on June 6th was a celebration of his first year and all the trials and tribulations he had been through in just twelve months. Six weeks later on July 13th, we received the last transmissions from his tracker. At this time of year he's on a three day cycle so we should have received more data on the 16th, 19th, 22nd and so on; we haven't.

Looking closely at his last set of data everything looks normal up to the the last few hours. On July 13th, the activity reading doesn't move from 09:55 until his last data point at 15:33, meaning the tracker didn't move during this time. We have had no transmissions since then. 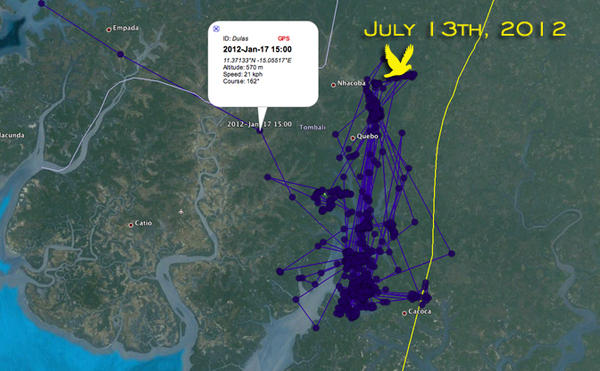 So, what could have happened to Dulas?

1. Natural Causes - we are beginning to learn now that being a young osprey in Africa is tough. Competition from other ospreys, birds, is intense. But now with all the adult birds back in Europe breeding (or attempting to breed), you would think that competition from other ospreys would be negligible. Perhaps he has been predated, maybe he had a disease, maybe he had an accident whilst flying and/or fishing?

2. Human Causes - Guinea Bissau is a desperately poor country, people live on what they can catch and grow in the wild. Yes, people eat birds, yes, people eat ospreys. It's a sobering thought, but Dulas may have been eaten. He could also have been trapped in fishing nets or line - this is a problem ospreys face the world over including in this country where many osprey die each year after getting tangled up.

3. He's still alive - let's end with the positive option. I have spoken to Roy and Tim at Rutand over the last couple of days, they have been kind enough to look at Dulas' data for us. Many thanks. Just like any technology, it can break. Maybe the tracker on Dulas' back is still there but not working; maybe it has fallen off and ended up upside-down, unable to send any more transmissions. Both Roy and Tim say this is a possibility, albeit remote.

At the end of the day we simply don't know. We are all here at Montgomeryshire Wildlife Trust, staff and volunteers alike, hoping for the best of course. I suppose that if anybody were to spot Dulas return next May or June, we have a good chance here at the Dyfi with all the High Definition cameras and optics we have. Being purely objective however, and saying this with a heavy heart, the probability is that Dulas has become one of the 70% of ospreys that never make it back to the UK. Dulas was a year and 37 days old when we lost contact; absolutely gutted.

I know, it seems very strange. I'm afraid the problem is human interference

Whilst we’ve all been worrying about Blue YZ over the past ten days or so, our other satellite tagged bird from 2012, Blue YD, has been a busy young osprey, making another of his periodic trips to the Senegalese coast and back.

Late morning on the 9th he left his favoured bend on the river Senegal, following its course downstream as far as Richard Toll. Continuing in a SSW direction he passed to the east of the city of Saint-Louis, reaching the coast and the Langue de Barbarie National Park, where some of you will remember he spent most of his first African summer, at around 4pm.

The following day (10th) Blue YD resumed his travels, heading a further 40 miles (70km) south along the coast, before changing his mind and returning north. By late afternoon on 12th he was back in the Langue de Barbarie National Park where he remained for a further day, travelling restlessly up and down the narrow sandy peninsula, maybe searching for a vacant roosting spot?

Perhaps due to fierce competition from overwintering adults or just a pining for that familiar bend in the river Blue YD began heading inland before 7am on 14th, retracing his steps over the following 24 hours and by noon on 15th was back on his wintering grounds.

Will this pattern be repeated again before spring? You’ll just have to keep watching to find out!… 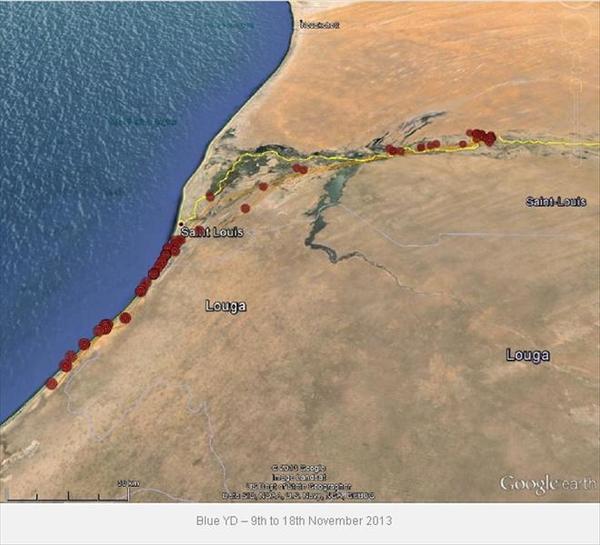