It seems that the 3rd eyas wasn't able to leave the egg shell alone and Harriet removed the egg...
So we have only two chicks. 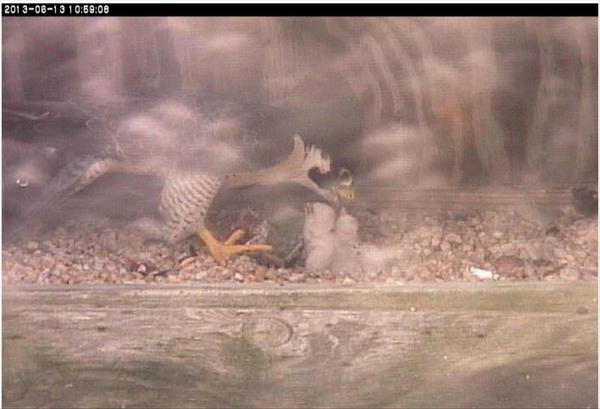 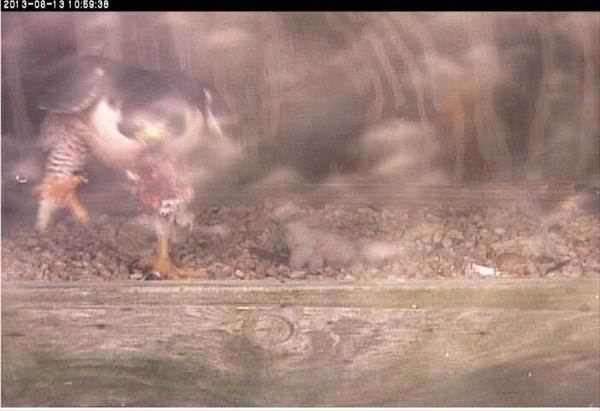 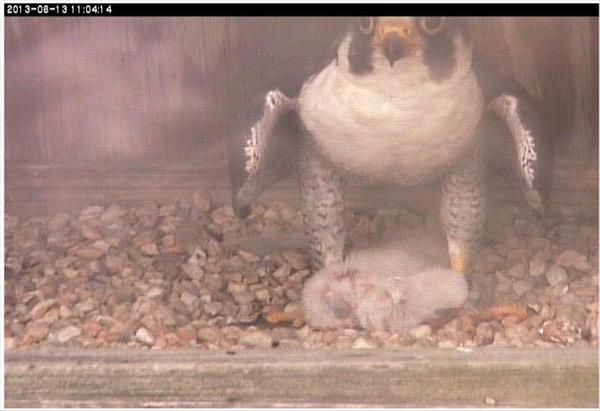 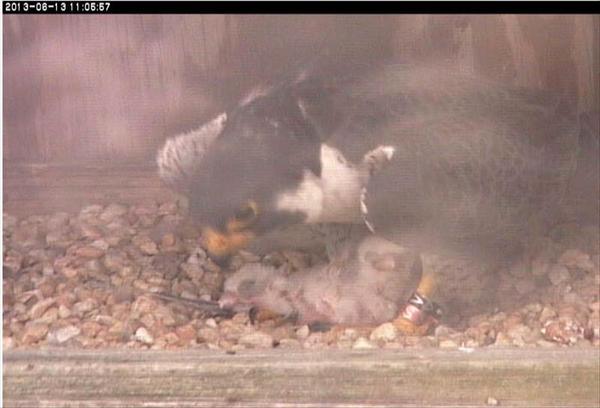 The final egg of this clutch has been removed by the adults. This chick seemed to be having similar difficulties in hatching as the first egg.

In two of the eggs from this clutch we’ve watched as the adult female (and to a lesser degree the male) picked away at the pip hole in the eggs greatly widening it. This is not typical behavior as peregrine falcons do not normally assist with the hatching of their eggs. Chicks that are too weak to hatch out on their own would not likely be strong enough to survive.

We are uncertain why exactly the adults have engaged in this behavior. Although it appears to be “helping” in actuality it likely makes it more difficult for the hatch to proceed. The chick typically rotates itself through the egg while pressing up against the shell with its bill. The large hole might interfere with the chick’s ability to turn and press up against the shell.

It should be noted that in both of the eggs that successfully hatched the adults did not pick away at the egg, but allowed the chicks to complete the cycle on their own. The adults are able hear and feel the chicks moving in the egg. It may be that the adults were aware of some problem with the hatch or embryos and that this is in some way connected to their picking away at the shells.

Thanks so much, Ferenz, for sharing this very interesting observation about the chicks unable to hatch.
As the past year it happened in Cleveland, TT, two of the eggs couldn't hatch (same way) and we had only a baby.
I don't know the Harriet's age.. They also said it maybe happening because SW was 13, but I don't think so-- just not so sure about. 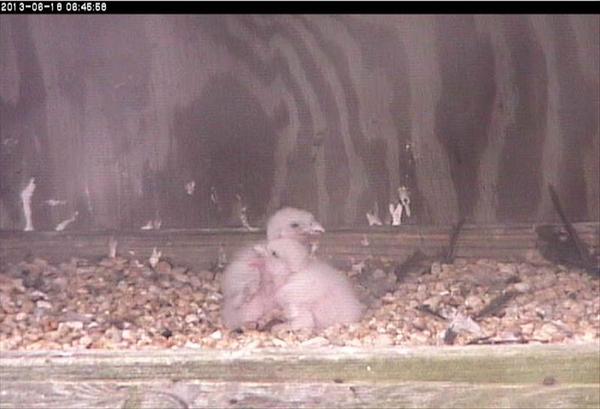 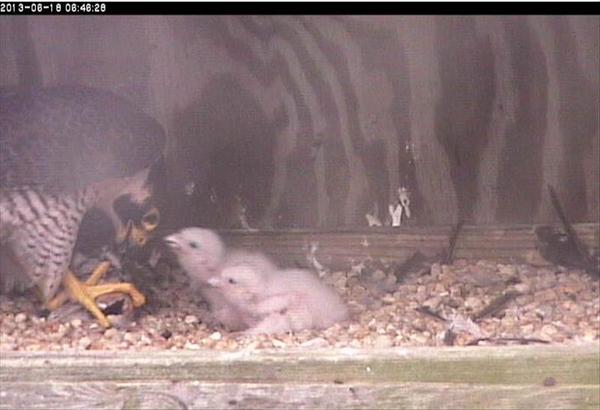 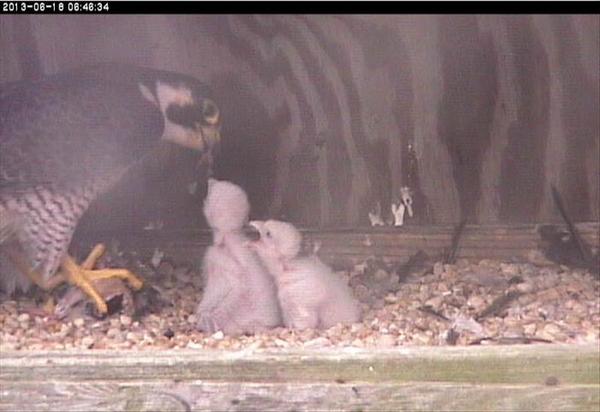 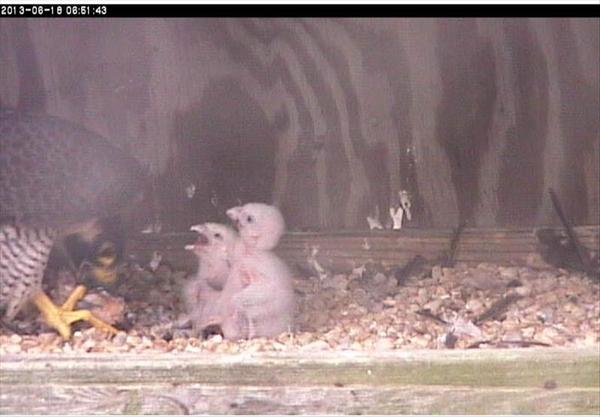 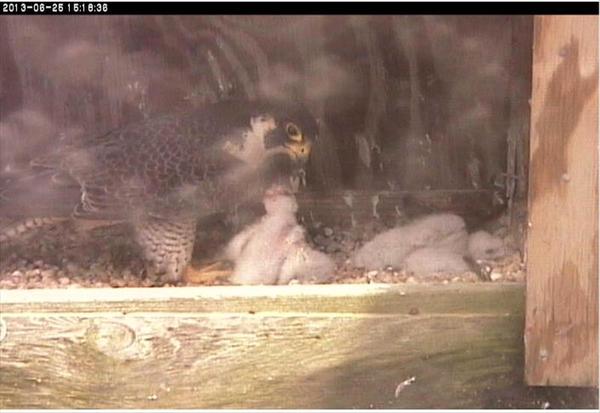 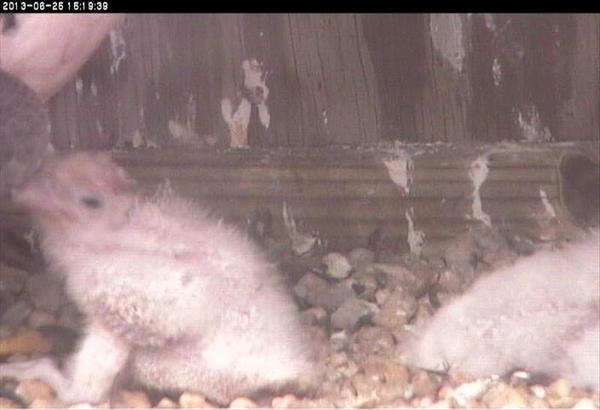 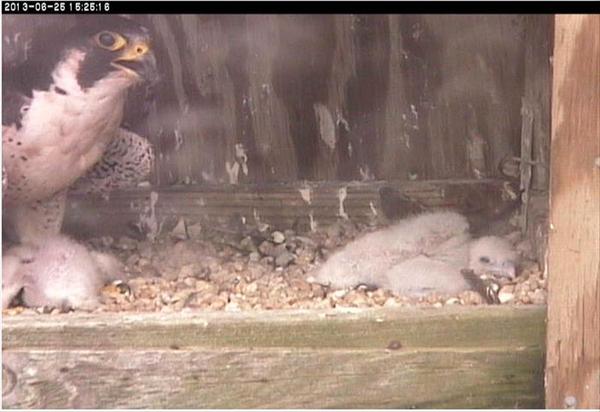 It is with regret that we report that the falcon nest at Riverfront Plaza has failed. When we checked the Falcon Cam this morning, Wed June 26, we noted that the nest box appeared empty. We suspected that the chicks had died and were removed by the parents, since at this early age the chicks are not yet mobile enough to leave the box on their own. We accessed the ledge later in the morning and confirmed that the box was indeed empty. As expected, both parents reacted aggressively towards us. We searched the ledge and found the body of the smaller of the two chicks in its western section, near the remains of various avian prey items. We conducted a search of the perimeter of the building at street level, as well as of the roof of the parking deck across the street, but were unable to locate the body of the second nestling. The high temperatures and heat index yesterday may be implicated in the death of the chicks, perhaps in conjunction with other factors. We will arrange to have a necropsy performed on the chick to see whether a more definitive cause of death can be identified.

In monitoring the Falcon Cam yesterday afternoon we noted that the smaller of the two chicks was missing the majority of the feathers from the top of its head. Sibling aggression on the part of the older, larger chick is one possible cause. This can sometimes occur among raptors in situations where there is a substantial disparity in the body size of the chicks, especially if there is competition for food resources. Unfortunately we do not have information on the frequency with which the parents fed the chicks over the past few days, and whether both chicks were being fed consistently. Yesterday afternoon the adult female spent considerable time shading the smaller chick. The chick appeared somewhat weak and wobbly, falling over several times as it attempted to stand.

This has not turned out to be a good year for this peregrine falcon pair - we hope for a better outcome next year.