FALCHI PESCATORI A LOCK OF THE LOWES -SCOZIA

Blue YZ heads for the hills (and a meeting with her brother?)
Posted on September 10, 2013 by jonathan

Blue YZ appears to have had enough of flying over water for the time being, following her early seabound adventures, which included a non-stop flight of up to 16 hours across the Bay of Biscay!

Having reached the coast of Asturias sometime in the early hours of the 8th, Blue YZ allowed herself a few hours recuperation (perhaps a spot of fishing?) by the mouth of the Ria de Villaviciosa, east of Gijón before resuming her southward journey. 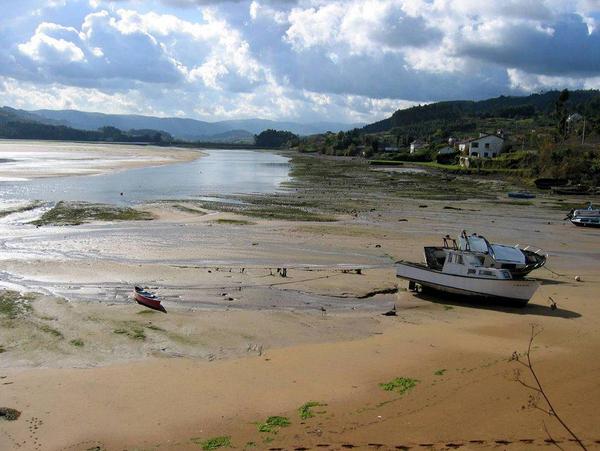 By 5pm she was approximately 120km (70 miles) inland, roosting in trees beside the Ria Bernesga, south of the historic city and provincial capital of León. She stayed there until at least 7am the following morning.

To reach this point she will have crossed the Cantabrian Mountains, a mountain chain stretching east-west along the border between Asturias & Cantabria to the north and Castile & León to the south. Many of the peaks reach 1800m (6000ft) with the highest exceeding 2500m (8000ft). Google Earth gives you some impression of their scale. 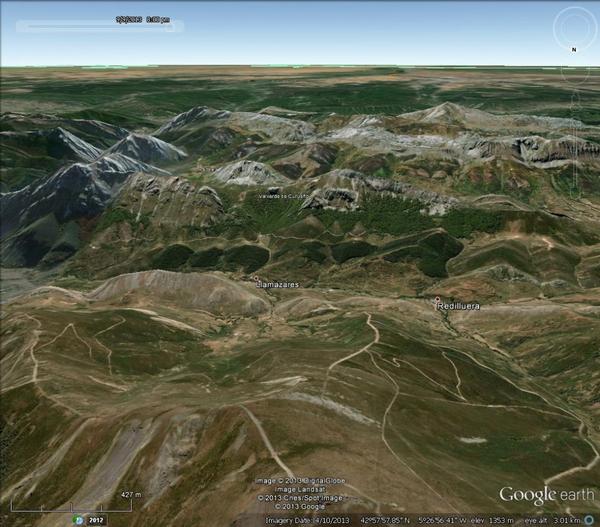 Yesterday (9th) is mostly a mystery at the moment as we have virtually no data after 7am. However, by 6pm Blue YZ was roosting again in NW Extremadura by the Rio Alagón, a tributary of the Tagus, Spain’s longest river. It is part of the same catchment as the Alcántara reservoir – the last known location for Blue 44 prior to his disappearance last November. Blue YZ’s roost location lies approximately 30km (17 miles) NW of the reservoir. Who knows, maybe a family reunion is on the cards! 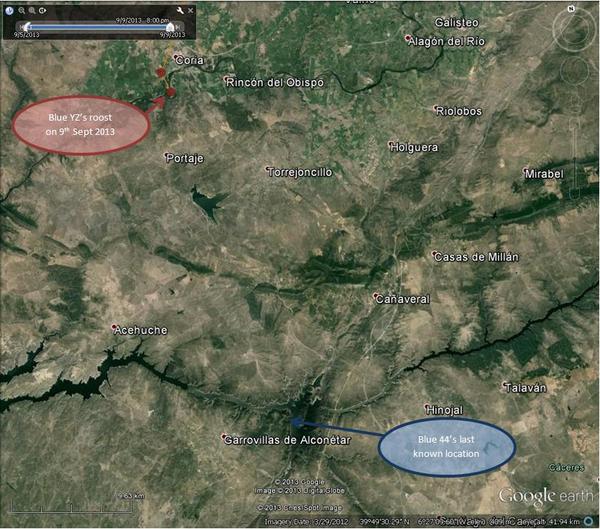 So far Blue YZ has covered a total of 2061km (1280 miles) – not bad for 5 days work! Maybe she’ll be in Africa by the time the next batch of data comes in. You can view the current data for yourselves at http://scottishwildlifetrust.org.uk/thi ... do/osprey/ 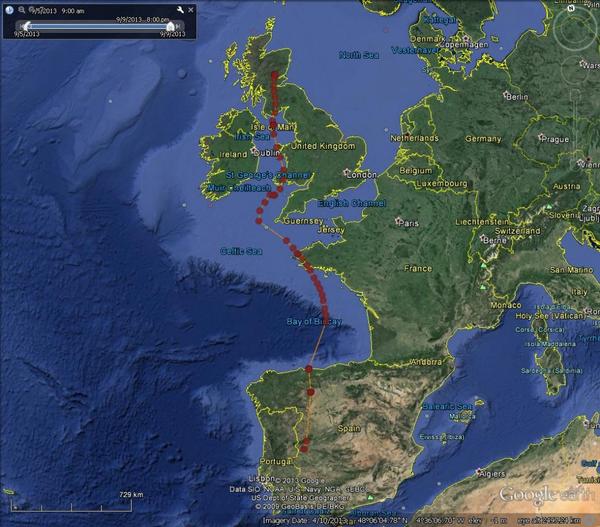 Speaking of family, it now appears that the male has definitely left Loch of the Lowes having not been seen since Saturday, bringing yet another osprey season to a close. There’s still plenty to see on the reserve at this time of year though so a visit is always worthwhile.

So the young Blue YZ is continuing her journey south towards the Gulf of Cadiz in southern Spain. It's incredibly exciting each time we download the satellite tracking data for her, as we wonder each time whereabouts she has got to in the last couple of days.

What I find remarkable is the huge distances she covers in just a few hours (on the 10th September she flew 180 miles in only 8 hours). Then she stops and rests each night, ready to head off early the next morning on another leg of her journey – almost like she doesn't want to waste a minute of daylight.

Over the last couple of days she has flown over the Càceres, Badajoz and Huelva regions of southern Spain, and has even nipped over the Portuguese border and back again at Barrancos.

Most of the terrain has been open grassland and farmland, with the occasional orchards and hills. Looking at these wonderful photographs of the areas she has been flying through – it certainly looks very different from Perthshire! 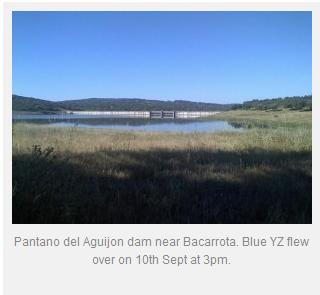 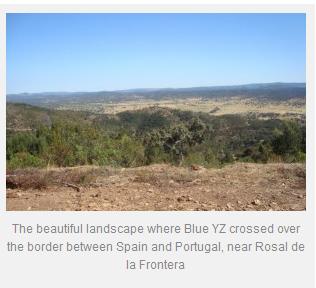 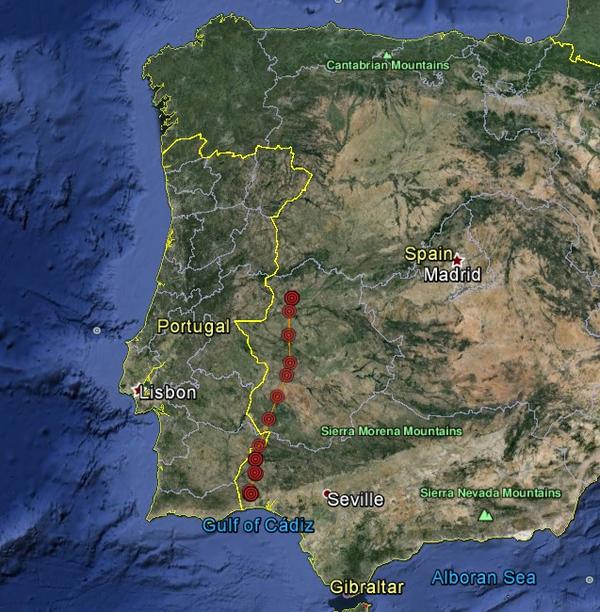 Our most recent data point for Blue YZ (12th September at 8pm) has her resting at a reservoir just 12 miles from the Gulf of Cadiz – so she is very nearly at the south coast of Spain. We don't know whether she will head further east and take the shortest route across the Strait of Gibraltar, or if she will take the most direct route south over the ocean – we can only wait and see! Either way, she is making a remarkable journey, and has already taught us so much about osprey migration and behaviour. Good luck to her for the next leg! 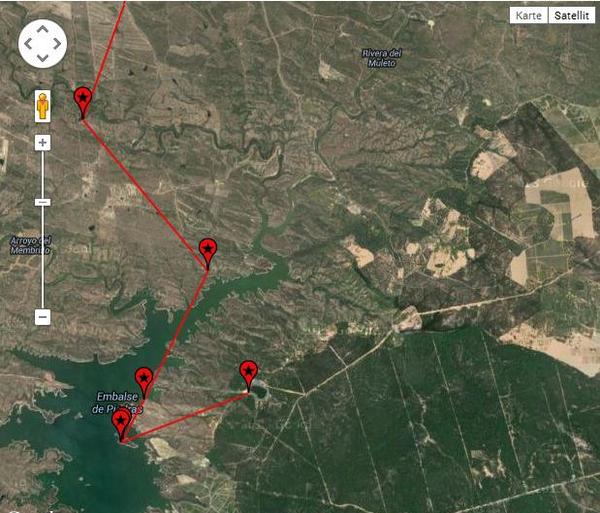 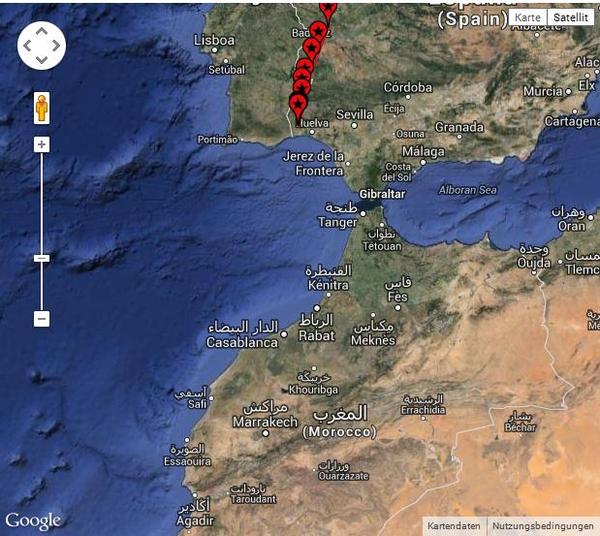 We've just downloaded the latest batch of satellite tracking data and Blue YZ is....still in Spain and heading back on herself. She left Embalse de Piedras, a reservoir, on the morning of the 13th and spent the rest of the day and the morning of the 14th at an unnamed loch and lochan nearby. She then headed back north, taking a different route to the one she took south. She wound up back at the Represa del Almendro dam, where she spent a few hours on the 11th. At most points she's stopped near water of some sort. The data shows she was roosting alot on the13th but also shows she was moving around from roost to roost. She's not gone any great distance. There are a number of data points missing from this batch of data, which not unusual, so we have no information from 1pm on the 13th to 8am on the 14th but its fair to assume she was hanging around the same loch. We're struggling to find much information about this area so if anyone has any do get in touch at lochofthelowes@swt.org.uk . If you follow the light orange line on the map below you can see her route back north. Has she found her roosting area for the next few years? We'll have to wait and see. 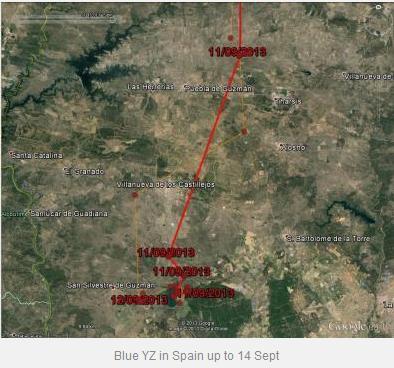 I'm just uploading the data to our website and it should be available in the next hour or so.

There's an interesting blog from Paul Wildlifewriter on 'The weather awareness of migrating birds' which uses Blue YZ, in particular her dogleg around Cornwall, as an example. 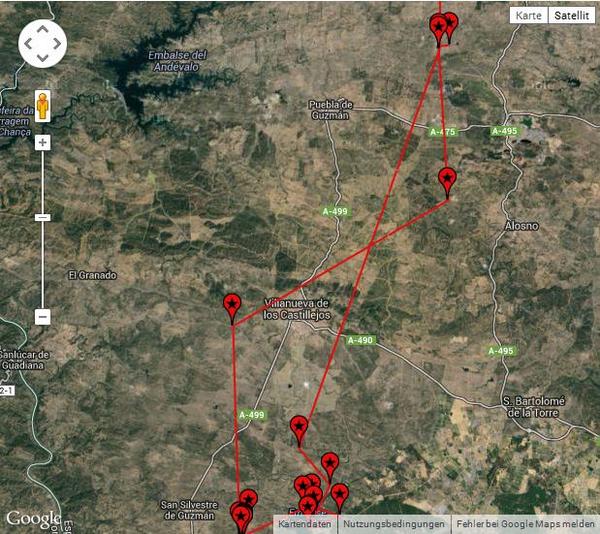 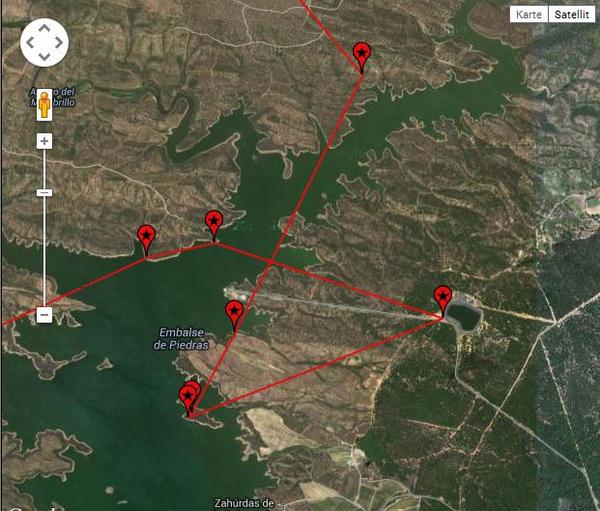 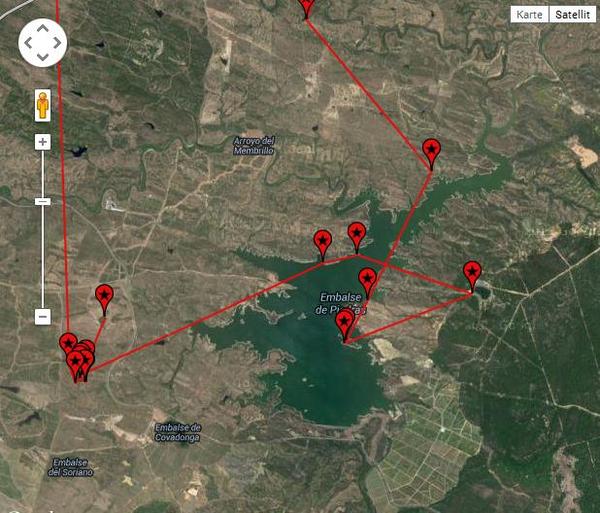 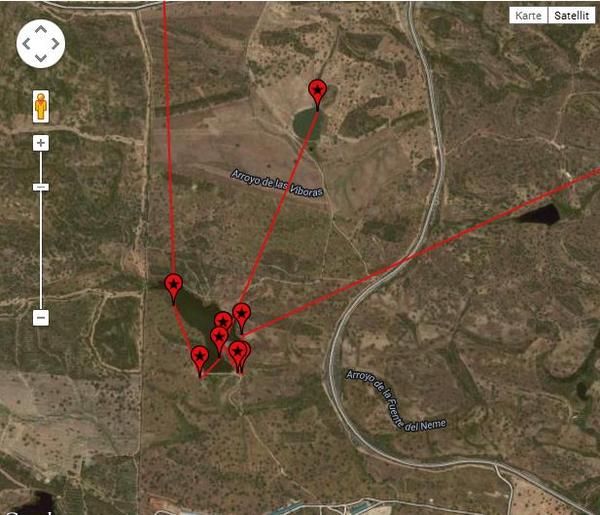 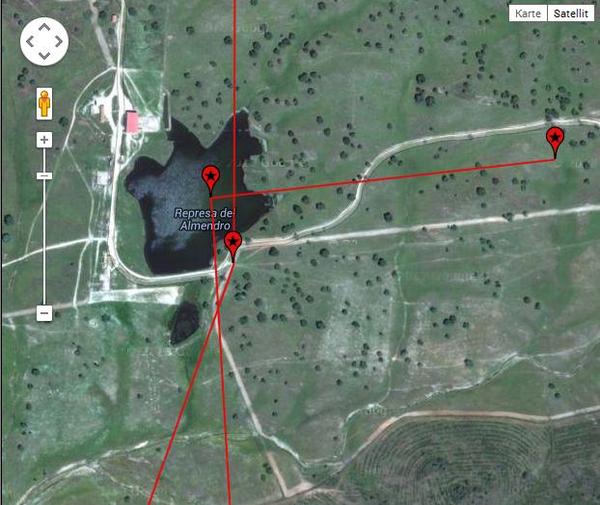 Yes Blue YZ is still in Spain, the latest data shows she’s been moving between the same three sites, Embalse (reservoir) de Piedras, the unnamed loch nearby and Represa (dam) del Almendro. So now it’s a waiting game, is she having a stopover like her brother Blue 44 did in France or is she preparing herself to move onto Africa or has she found her winter roost we’ll just have to wait and see. The latest satellite tracking data will be up on the site in an hour or so. 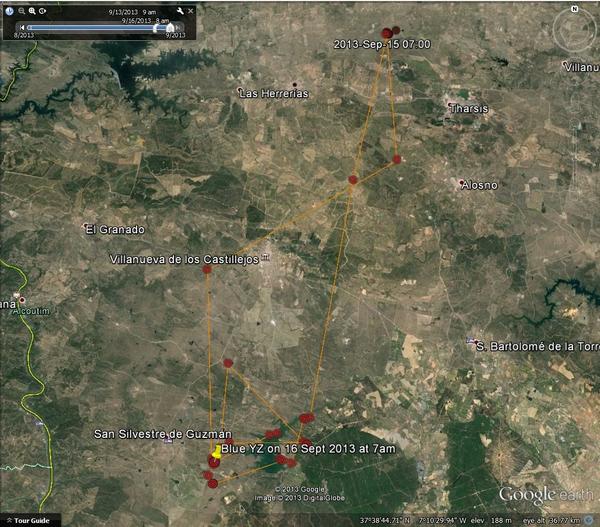 And what of our other satellite tracked bird, last years chick from Angus Blue YD? He’s still living on ‘his’ bend of the River Senegal tootling around between favourite roosting spots. 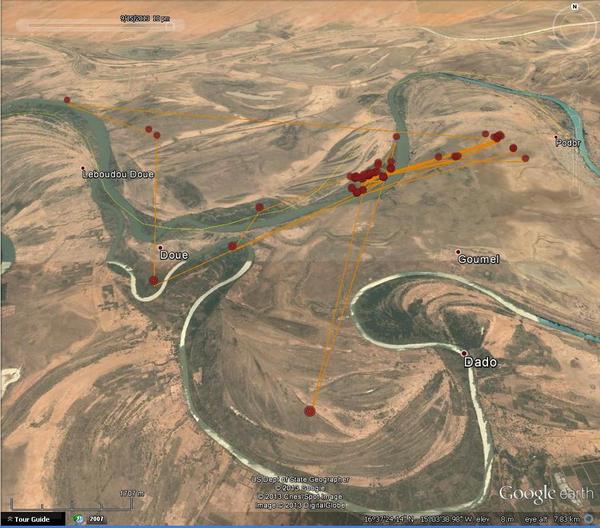 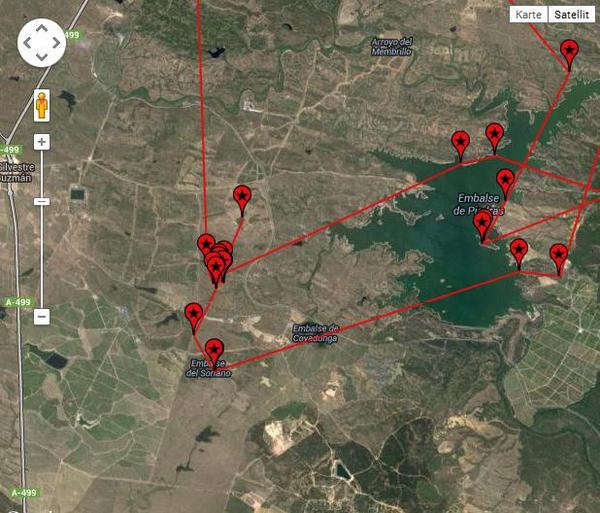 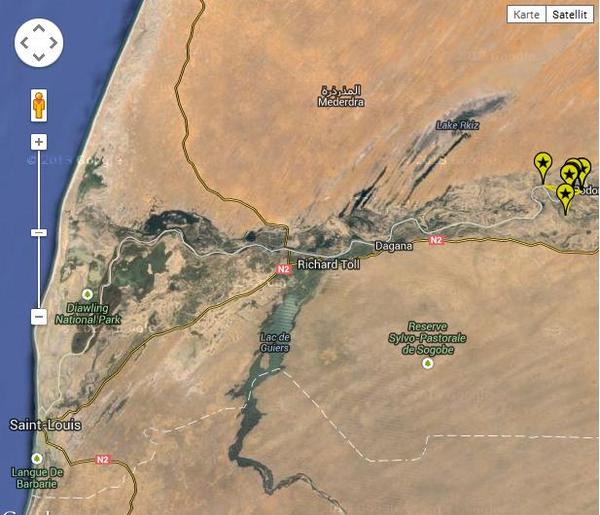 Sorry its been a couple of days since my last blog folks- it’s been a busy week here at the Loch despite the lack of ospreys!

On Monday our trusty team took down the HD osprey nest camera for maintenance over the winter- hopefully we will be able to get to the bottom of its temperamental behaviour. The osprey nest night-vision camera was also rewired right up the tree ( you may remember this power cable was chewed in several places over the summer by wildlife of some sort). Neither of these tasks was easy and involved Sam and Lindsey climbing a great height complete with tools etc- a real feet of bravery! 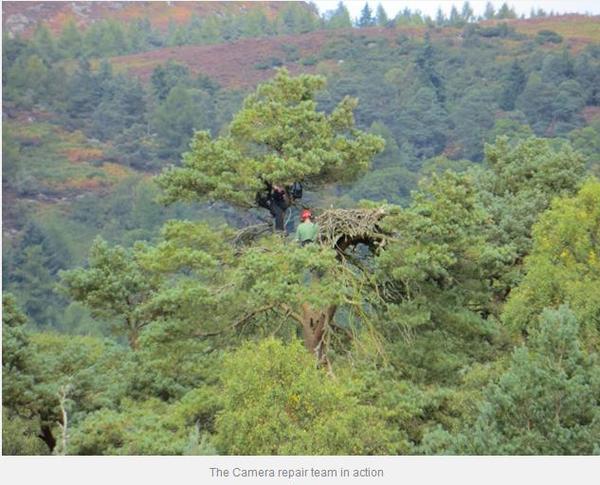 Lastly but most excitingly there is news from Spain! A dedicated osprey watcher Chris Wood is on holiday in Portugal and gallantly volunteered to head out to the reservoir where Blue YZ is spending her time lately. He rang us today just after 3pm to say he had been watching two ospreys on a small island on the SE end near the dam for the last hour. Could one of them be Blue YZ? We should know for sure tomorrow when we download the latest data and see if this corresponds to the sighting. How exciting to think she has been seen ‘in the flesh’ so to speak- and a big thank you to Chris for letting us know. 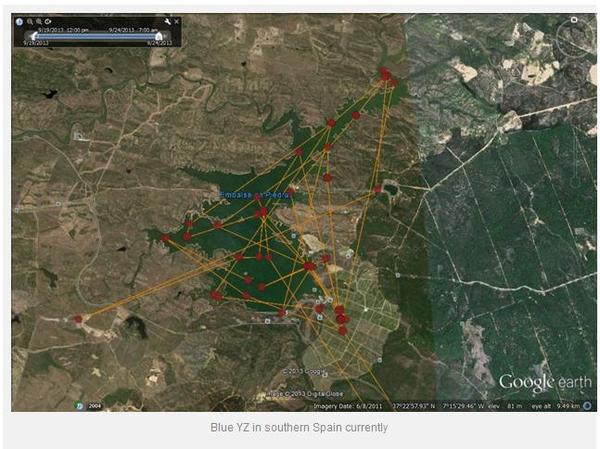 Blue YZ – the field report
Posted on October 4, 2013 by rangeremma

We have a fabulous field report from our friend and keen osprey watcher Chris Wood who twice in the past week has actually visited the Spanish reservoir (Embalse de Piedras) where Blue YZ has been hanging out. 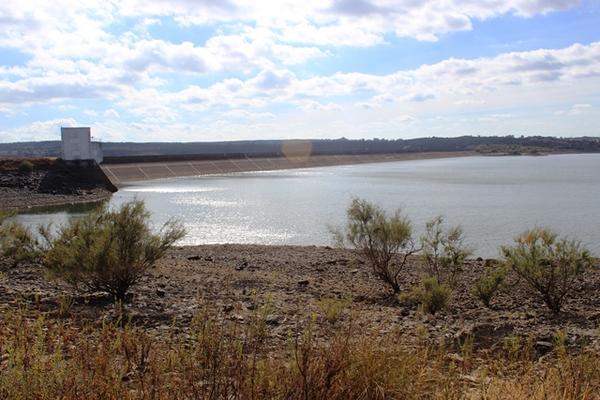 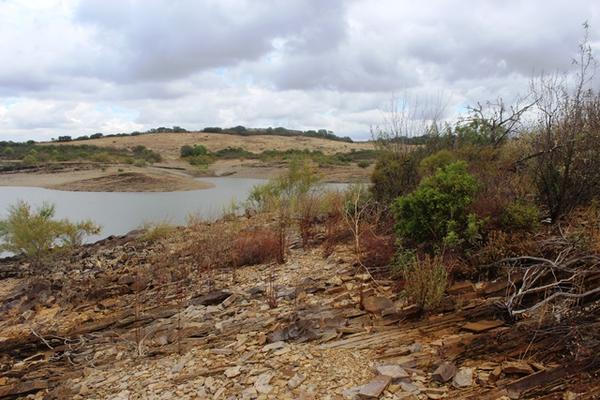 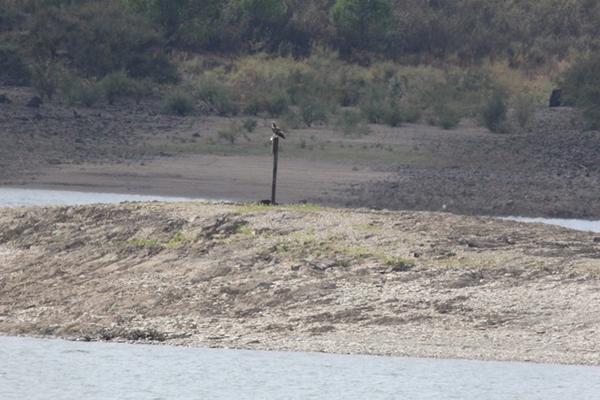 Chris has also solved a mystery for us! Recent satellite tracking data has shown Blue YZ favouring 3 roost spots which are in a very straight line and at a height that seemed rather high for the citrus trees in the area. Chris’s visit to the site revealed that those roost spots are a line of pylons. It shows that although satellite tracking gives us invaluable information, complementing it with site visits (when possible!) gives a clearer, fuller picture. 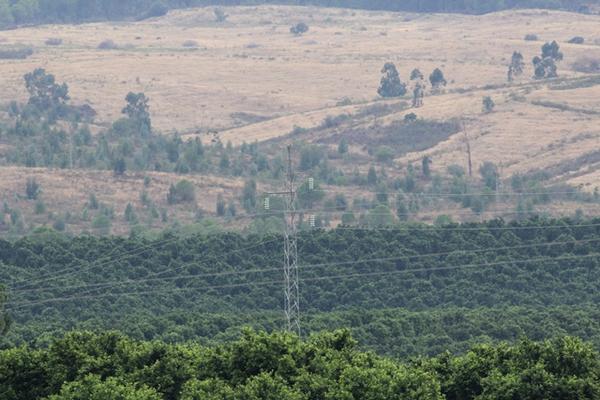 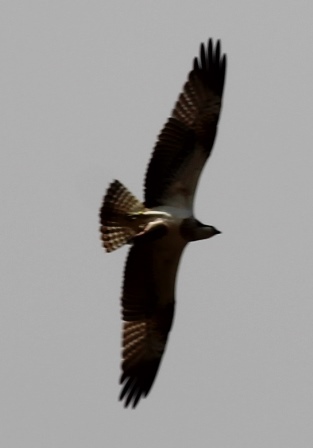 Our young osprey Blue YZ seems to be making habit of taking dramatic routes on her first migration and worrying us all. If you have been following the interactive map ( see link to your right on this page) you will already know she left her sojourn location in Spain over the weekend and headed south. It seems the instinctive call of Africa overrode the attractions of wintering in southern Spain, though it did prove a very useful rest stop on route.

After a textbook crossing near Gibraltar, she has then made it across the Atlas Mountains of Morocco. Instead of sticking to a safe coastal route , she has headed almost due south inland into the heart of Algeria, into desert territory- a very inhospitable place for an osprey. She is now over 500km from the coast , and she roosted overnight on Wednesday on a rocky plateau amongst sandy dunes. 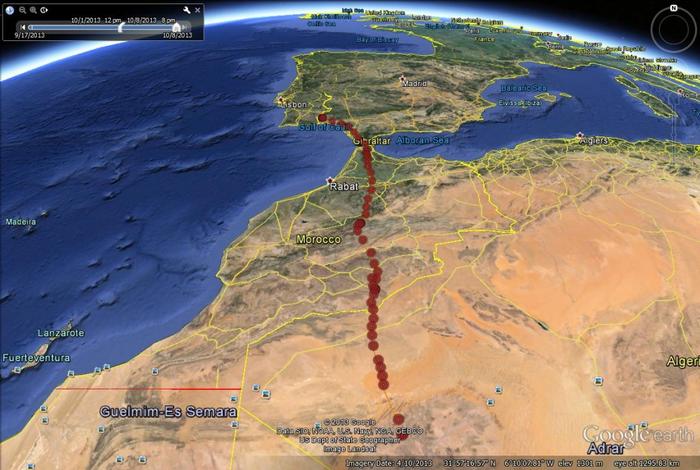 It is not at all impossible that she can survive this desert crossing- if she has the energy reserves and stamina. However, this route is very dangerous and complicated by things such as potential for sandstorms etc. 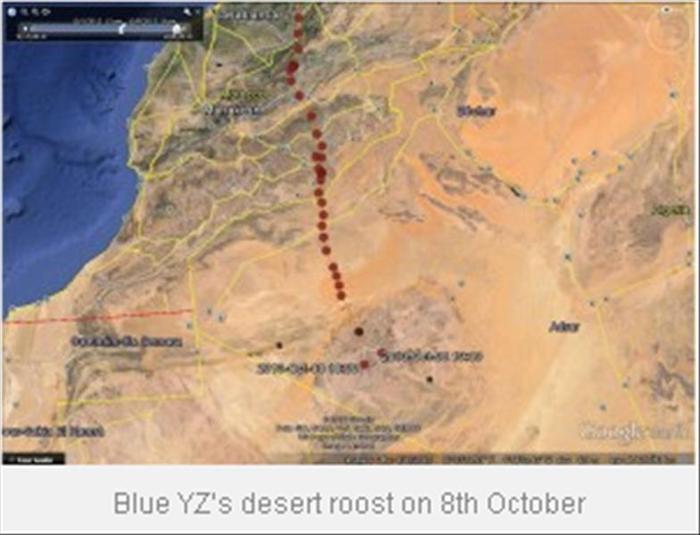 We will update you as soon as the next batch of data comes in , in the next 24hrs , which should tell us if she has made if safely- keep all your fingers, arms and toes crossed for our young bird- she’s going to need all the help she can get!